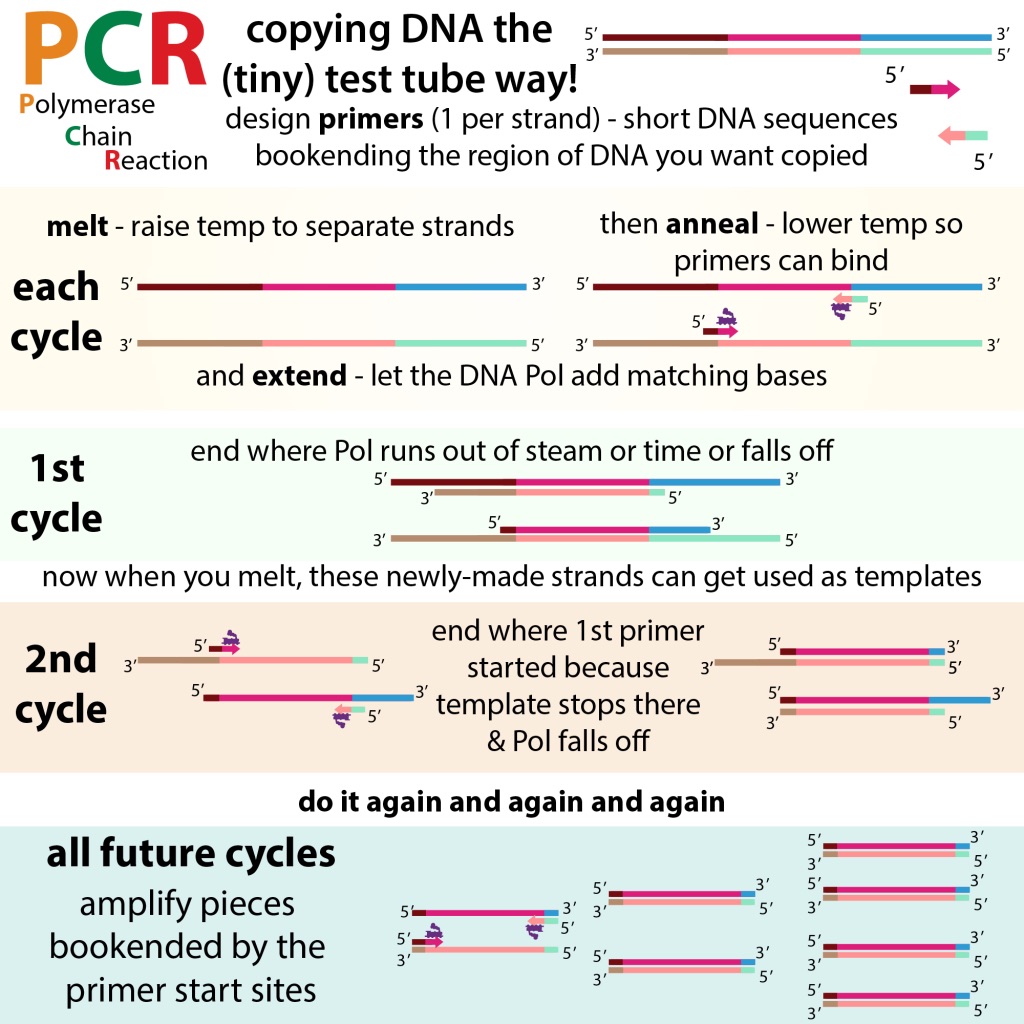 How do you perform a Polymerase chain reaction?

Performing a Polymerase chain reaction (PCR) is a method for detecting genetic material from a pathogen or abnormal cell sample. It is also used to make multiple copies of a segment of DNA.

Detecting genetic material from a pathogen or abnormal cell sample

Detecting genetic material from a pathogen or abnormal cell sample using polymerase chain reaction (PCR) is a fast and highly accurate method of diagnosing genetic changes. It has wide clinical applications. It can identify emerging diseases and biothreat agents. It also has the advantage of being able to detect multiple targets simultaneously. However, it still has limitations and needs further advancement in technology.

A sample of a pathogen or abnormal cell is cultured in growth-supporting media to isolate the causative microorganism and determine antibiotic susceptibility. Genome sequence analysis has allowed better identification of virulence factors and deficient metabolisms. It has also facilitated the development of new clinical-microbiology tools. In addition, genome-sequence-based MLST assays have been useful in typing pathogens with highly variable genomes.

Gene sequencing has also provided more accurate identification of fungi and bacteria. It is more objective than phenotypic methods and does not require optimal growth. It can be used to detect pathogens in clinical samples, but further advancements in technology are needed to increase the sensitivity of detection.

In general, the ideal detection assay should be rapid, specific, and minimize complications. It should be capable of identifying the most important virulence factors, toxins, and genes associated with antibiotic resistance. It should also be sensitive to the degree of difference between sequences.

PCR is one of the most developed and widely used molecular techniques. It involves the addition of a thermostable DNA polymerase enzyme to a DNA sample and amplification of the target DNA. This process is repeated many times, producing billions of copies of the target DNA after an hour. The target DNA is compared with reference DNA sequences in public and private sequence libraries.

Various PCR assays are being commercially developed. Among these, genome-based DNA microarrays were developed to genotype Escherichia coli. These PCR assays have the advantage of being fast, sensitive, and high-throughput. They can be automated and are intermediate between non-sequence-based methods and sequence-based methods. They have the potential to increase throughput by allowing simultaneous strain comparisons at the whole-genome level.

Making multiple copies of a segment of DNA

Using a polymerase chain reaction (PCR) can produce a large number of copies of a single segment of DNA. The process is simple and based on the processes that cells use to replicate and recombine DNA. The technique has been used for many applications, including medicine, medical diagnostics, and forensic analysis. It is also an important component of a wide variety of research projects.

PCR involves the addition of an enzyme called a DNA polymerase to a DNA template. This enzyme joins together free DNA nucleotides according to the instructions of the template. The free nucleotides then form new strands of DNA, a process known as synthesis.

The process requires three stages: primers, an initialization step, and three thermal cycling processes. The initialization step involves heating the reaction chamber to 94-98 degC (201-208 degF) for 1-10 minutes. The primers are synthetic DNA fragments, usually short stretches of a single nucleotide. They are complementary to the target region of the template. The primers bind to the ends of the template and allow the enzyme to extend toward them.

The next step involves denaturing the template, a procedure that breaks hydrogen bonds between the complementary bases. The primers are then annealed at 55 degC to allow them to bind to the target region of the template.

The polymerase chain reaction produces a large amount of copies of a single segment of DNA in a matter of minutes. The resulting DNA can then be sequenced, cloned into a plasmid, and further analyzed.

In addition to producing a large number of copies, the polymerase chain reaction is a time-saving technique that allows scientists to make a small sample of DNA for further analysis. It can be used to copy rare or complex DNA segments. In one minute, one thousand DNA bases can be copied.

PCR can be used to generate billions of copies of a DNA sequence in a relatively short period of time. This is useful for a variety of purposes, including detecting viral genes in infected cells and studying DNA amplification. It is also useful in determining how quickly a particular gene is expressed.

Detecting contaminating DNA from previous reactions is a daunting task. Luckily for us, a little bit of caution goes a long way. The process can be accomplished with the aid of baked glassware, aliquots of nuclease free water and a dose of good old fashioned common sense. By the time you're done you'll have a clean slate to perform the next steps in your quest to find and eliminate DNA.

In addition to a proper purification protocol, you'll want to consider using a properly calibrated PCR apparatus and a suitable buffer system. Fortunately, there are a number of commercially available kits to choose from. If your budget is tight you can even try your hand at a do it yourself procedure. If you do decide to give this a go, be sure to check out the manufacturer's instructions first. You'll be glad you did. You'll also have a great excuse to re-run that oh-so-boring test! Keeping an eye on the lab glass while you're at it is a good idea.

The most interesting part of the equation is the discovery that you can actually use the process to produce a high quality PCR product. In fact, there are even commercial kits that allow you to use the resulting product in your own PCR apparatus. This will not only reduce the risk of contamination but you'll have a ready supply of high quality RNA for your amplification experiments. Depending on the concentration of the final product, you may be able to perform the whole shebang in a single tube. In fact, we've had success with as few as three tubes!

The best part is that it's a relatively cheap, easy to use and most importantly, it's guaranteed to deliver results. Whether you're dealing with a lab or your home water source, you can count on this little biosensor to tell you what's what and what's not.

PCR is used for many purposes in the laboratory and in medical diagnostics. It is a procedure in which a sample of genetic material is copied multiple times. It can be used to detect the presence of pathogens and pathogen-associated genes in a sample. It is also used to measure the level of gene expression.

PCR can be a very useful technique for testing for the presence of pathogens and pathogen-associated DNA in a sample. This method uses a thermostable polymerase to produce many copies of a specific region of DNA. Depending on the type of sample being tested, a relatively small amount of DNA can be amplified using specific primers. This method can also be used to amplify fetal DNA.

Quantitative PCR is a technique that uses a reporter dye to measure the progress of a PCR reaction. This dye binds to double-stranded DNA. It records the pattern of exponential growth and provides an index of how rapidly the reaction is progressing. It can also be used to measure the rate of generation of a specific product.

Quantitative PCR is often performed at the same time as a PCR. Typically, ten samples are run. The process can be very difficult, but it can be accomplished successfully. People familiar with standard PCR may find it easier to perform Q-PCR.

Several types of fluorescent probes are used in a qPCR assay. Rather than using random primers, fluorescent reporter probes are specifically labeled to detect DNA that has a complementary sequence. This allows the reporter to avoid the interference caused by the inhibitory effects of primer dimers. This increases the specificity of the amplification and the ability to monitor multiple targets in a single tube.